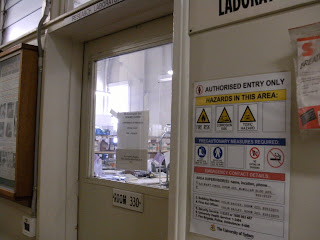 "By its light will the nations walk, and the kings of the earth will bring their glory into it..." Rev. 21.24

I studied an Arts degree at Sydney Uni. To be more precise, I majored in Ancient and Modern History. So, as I'm back at uni now serving alongside the postgrad/staff faculty of the SUEU, I don't pretend to know much of what the science guys I meet with are saying when they start talking physics. An I'm often annoyed and frustrated by the arrogant, modernist faith placed in scientific knowledge and achievement. It's a mean metanarrative right?

However, a fascinating thought was explained for me tonight as a talked to a friend. Is the resurrection's affirmation of creation (c.f. Oliver O'Donovan's Resurrection and Moral Order) also an affirmation of scientific inquiry into creation? My friend has written a 2000 word paper on this topic, which I'm yet to read, but if anyone else has thought more seriously about this than I have, I'd love to hear what you think. Especially if there are any scientists out there.
Posted by Matthew Moffitt at 1:35 am

There is a big difference between science and scientism. The latter is a belief/claim that all of reality can and must be explained scientifically.

I suspect this will be pretty tricky to untangle, Matt.

Opinion seems to be pretty evenly divided on whether modern science is a child of Reformation faith or Enlightenment scepticism.

O'Donovan himself reckons neither -- in On The Thirty Nine Articles he suggests that it was the Reformers' failure to develop a biblical account of creation, or indeed anything much of an account of creation at all, that opened up the space within which modern science unfolded.

Richar Cahart and Adam Cenian have written some helpful and quite clearly written material looking at the Science/Scientism issue and the assumptions inherent. I'm not a Scientist so they stretched me a fair way but I recommend them to you.