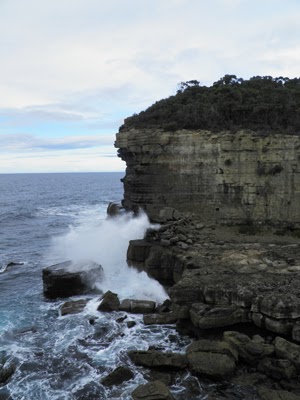 "I am troubled, Sir," said I, "because that unhappy creature doesn't seem to me to be the sort of soul that ought to be even in danger of damnation. She isn't wicked: she's only a silly, garrulous old woman who has got into a habit of grumbling, and one feels that a little kindness, and rest, and change would put her all right."

"That is what she once was. That is maybe what she still is. If so, she certainly will be cured. But the whole question is whether she is now a grumbler."

"I should have thought there was no doubt about that!"

"Aye, but ye misunderstand me. The question is whether she is a grumbler, or only a grumble. If there is a real woman-even the least trace of one-still there inside the grumbling, it can be brought to life again. If there's one wee spark under all those ashes, we'll blow it till the whole pile is red and clear. But if there's nothing but ashes we'll not go on blowing them in our own eyes forever. They must be swept up."

"But how can there be a grumble without a grumbler?"

"The whole difficulty of understanding Hell is that the thing to be understood is so nearly Nothing. But ye'll have had experiences . . . it begins with a grumbling mood, and yourself still distinct from it: perhaps criticising it. And yourself, in a dark hour, may will that mood, embrace it. Ye can repent and come out of it again. But there may come a day when you can do that no longer. Then there will be no you left to criticise the mood, nor even to enjoy it, but just the grumble itself going on forever like a machine.
– C.S. Lewis, The Great Divorce

It has been suggested that our habits serve as a fulcrum to direct our love.* That is to say the practices in which you habitually engage have such power to shape what you ultimately love. Our heart’s desires are shaped and molded by the habit-forming practices in which we participate daily and weekly. If that is true, there is then perhaps no other habit more destructive than grumbling. The Bible consistently warns against it. Repeatedly throughout their time in the wilderness Israel are reported to have grumbled against the Lord:

...in the morning you shall see the glory of the LORD, because he has heard your grumbling against the LORD. – Exodus 16:7

And reflecting on those years in the wild, Paul writes:

It was Jesus’ own assessment of those who rejected or doubted him during his ministry (John 6:43). It is presented as an opposite habit of Christlike humility in Philippians 2 (cf. v.2), whilst Peter contrasts it with genuine love and service, which are to be free of grumbling in the way Christians show hospitality to one another (1 Peter 4:8-9). And the Apostle James, who has much to say about the power of the tongue (James 3:1 ff.), cautions against grumbling in these last days:

Do not grumble against one another, brothers, so that you may not be judged; behold, the Judge is standing at the door. – James 5:9

Whilst the normative Christian practice is one of patience and waiting, grumbling kills our steadfastness. Instead of feeding and strengthening our hearts as James encourages Christians to do, grumbling poisons our desires, our love, our heart. Instead of waiting it leads to impatience and hastiness. Instead of building one another up in love, grumbling turns us against one another. It kills our endurance, leading to the double minded instability James warns his readers against. It doesn’t happen overnight, but the cultivation of the habit of grumbling leads to an expectation that things can never change. Grumbling kills our hope, leading to malice, bitterness, and cynicism. It is a serious soul killer, as C.S. Lewis vividly portrayed in his description of the woman who has so habitualized grumbling that she herself has been reduced to a grumble.

What then is the balm to grumbling? Thankfully, there are what James K.A. Smith describes as habits, virtues and practices that are so charged with the gospel of God that they feed our hearts and direct our love more and more towards God, his church and his world. Thanksgiving seems to play an important role in producing endurance without double-minded grumbling (cf. James 1:2-8). The cultivation of receiving gifts with thanksgiving from God’s generous hands is a counter habit to grumbling. I suspect actually that this is why the Anglican divines incorporated so much thanksgiving into the Church of England liturgy. The practice of kneeling side by side with your brothers and sisters as you thank the “Father of all mercies” with the “…most humble and heart thanks for all they goodness and loving kindness to us and to all men [sic]” forms a humility and patience. After thanking God for the bounty of creation and all the blessings of this life, you thank him for his “inestimable love in the redemption of the world by our Lord Jesus Christ”. And as you pray this prayer of thanksgiving, you hear again the gospel and God’s extravagant generosity towards you; and this melts your heart, so that you worship anew the Lord who is compassionate and merciful (James 5:11).

There are of course many other habits and practices that can be employed against grumbling. But thanksgiving is foundational to producing the patience and endurance during good times and bad that firstly continues to hope for the coming of the Lord, and secondly serves others with love and imagination until the end comes, and all things will be made new.