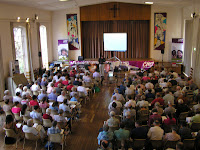 I've had another article published - this time in CMS Today! wrapping up the CMS conference we held in Canberra a month ago. So, it's pretty fun to have been published twice in a week.

If you're a CMS member or supporter, then keep an eye out for it. And if not, you can sign up here.

This photo actually taken by me.
Posted by Matthew Moffitt at 1:59 pm 3 comments: Links to this post

A little while ago I 'reviewed' The Lost History of Christianity by Philip Jenkins. Jenkins has been interviewed on Christianity Today about the other of church growth - and why some churches die.

It's well worth a read, and you can find it here.

CT: Why does persecution sometimes strengthen a church and other times wipe it out?

PJ: The difference is how far the church establishes itself among the mass of people and doesn't just become the church of a particular segment, a class or ethnic group. In North Africa, it's basically the church of Romans and Latin-speakers, as opposed to the church of peasants, with whom the Romans don't have much connection. When the Romans go, Christianity goes with them.

But Christianity establishes itself very early as a religion of the ordinary, everyday people in Egypt as things get translated into Coptic. As a result, after almost 1,400 years under Muslim rule, there is still a thriving Coptic church that represents [perhaps] 10 percent of the Egyptian people—which I would personally put forward as the greatest example of Christian survival in history

Posted by Matthew Moffitt at 1:12 pm No comments: Links to this post My article on the centrality of the resurrection in the apostolic gospel has been published in the Autumn AFES SALT magazine. I'm on page 10. Byron also has an article on Heaven: Not the End of the World.

If you don't already receive SALT, you can freely subscribe here.

And at some point I'll probably post my article on hebel.
Posted by Matthew Moffitt at 12:59 pm 6 comments: Links to this post

A Rant on the Current State of Church Services 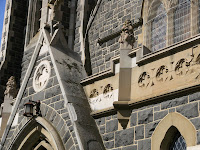 Once upon a time, you could walk into any Anglican Church in the world and you would know exactly what was happening in the church service. For centuries the Anglican church around the world had followed the same pattern of liturgy and worship. All this changed in the twentieth century with the updating of language and customs - which was quite right given the great difference in language from the 1662 to the 1970's when the first modern Anglican prayer book was published in Australia. But since then the rate of revision had been rapid and astronomical. After three centuries of exclusive use of the Book of Common Prayer, the Diocese of Sydney (formally) went through 3 different prayer books in just 30 years. Besides this, many churches have moved to type of informalism for their services.

Many of these changes have been necessary to keep up with the development of Australian society over the past 50 years. But accompanying this has been a worrying tendency. It has become all to easy to throw out anything the is old, traditional or formal (i.e. the creeds, communion, confession) for the sake of informality. Informalism for the sheer sake of informalism is not a desirable thing. In fact, if anything, it has often resulted in church services that are half-baked, half-arsed, and run according to whim. In pursuit of the noble cause of being informal, our church services are reduced to cliche's and entertainment - the congregation has no idea what will come next and so are reduced to being an audience as they await the next move.

The other problem is that the pursuit of this highest ideal is that our informal services are often just as unintelligible and alienating as the liturgy that they replaced. I saw this problem in my old church. The theory was that no one in the town would step into church, but they would spend all their time in cafes. So turning the church service into a cafe seemed the obvious thing to do. Except that it was a poorly run cafe - why go to there when people go to a nice and comfortable cafe two doors up the road. Nor only did it fail misread to the culture, it also failed to serve the people actually at the church. And has been stated elsewhere:

'The reason we eschewed formality in church services was because that was what WE on the inside wanted (or some of us, anyway) - the missiological reason was in fact only a justification for it'

Of course formalism for the sake of formalism is also dangerous. One of the great strengths of Anglicanism has been it's quality to culturally contextualise it's form and identity to whatever situation it's in. The challenge we face in our contemporary liturgy is to provide church services that allow for spontaneity the relaxed felling that informal service provide, whilst not descending to pure laziness or rejecting good practices on the basis of how formal they are. Let's not throw the baby out with the bath water. Following up from my previous post, I want to nuance what I said about church planting in Sydney. We are quite prone to planting churches of one particular type - that is churches which are led by alpha males. If one of our churches starts falling behind, we parachute in one of these guys and expect their ability as a 'renaissance man' to turn everything around.

These men are typically assertive in their leadership, and can generally command the loyalty of their church by sheer force of personality. (To generalize even further, they are sporty - or at the very least are well built and handsome). You can see this in many of the leaders in our diocese. Rather than being the softly spoken kind of guys, these men are often seen at church holding court - they are the center of conversations, with younger guys hanging of their every word. And so the next generation of church leaders emulates the current crop of alpha males. They often come across as brash and assertive, and the next thing you know they are late to lectures because they're playing touch or cricket.

Remember too that the Apostle Paul was not a great speaker. He wasn't a great surfer, shuffle around in his designer clothes or have a tan to an enunciate his rugged good looks. Instead he was a poor speaker, ship wrecked and beaten a few times. It is in our weaknesses that He is strong.

I'm not saying that all our ministers are like this. There are many men in ministry who definitely aren't alpha males. They're scrawny and softly-spoken, and full power to them. But if we continue to plant churches where all the men are expected to be die hard rugby fanatics, then that is a significant portion of the population that we are marginalizing and excluding from our churches. We should not let one particular type of manhood become the exclusive picture of Christian maleness. Especially when it is already hard enough for men like this to fit into church.
Posted by Matthew Moffitt at 11:33 pm 6 comments: Links to this post