The next episcopal election for the Archbishop of Sydney is not until 2013. But there is already movement at the station, with the latest Australian Church Record not only containing two articles on leadership, but also a guide on what to look for in a future archbishop. Peter Bolt, besides suggesting that several of his colleagues at Moore College should be considered as potential candidates, offers several pieces of advice on how the next archbishop should be: 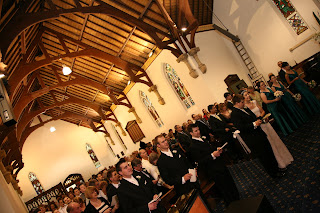 "By men [sic] assembling here and there in the Holy Spirit there arises here and there a visible Christian congregation. It is best not to apply the idea of invisibility to the Church; we are all inclined to slip away with that in the direction of a civitas platonica or some sort of Cloud-cuckooland, in which the Christians are united inwardly and invisibly, while the visible Church is devalued." - Karl Barth, Dogmatics in Outline. h/t Steve.

Check out Andrew Errington's post on "Assembled in Heaven?".
Posted by Matthew Moffitt at 9:32 am 3 comments: Links to this post

The Need for Christians in University 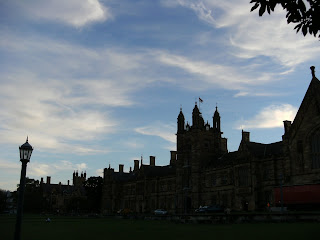 “The story is told of a conversation between two of the most celebrated German liberal Protestant theologians of the nineteenth century, Albrecht Ritschl and Adolf Hamack. The more conservative sections of the German Protestant churches had recently gained some significant political victories. Ritschl's advice to Harnack is reported to have been something like this:

‘Never mind about the politics; get on with writing the books that will change the way people think. In the long term, that is what will be of decisive importance.’

As one looks at the sustained gains made by liberalism in German Protestantism up to the eve of the First World War, the wisdom of Ritschl's advice is clear: to win the long-term victories, you have to influence the way in which a rising generation thinks...

[W]hat if we were able to look ahead to a day when we would have financiers who knew as much about the Christian faith as they did about economic theory? And more than that: not simply that they knew about both, but were able to relate them, and bring them together in such a way that we could talk about ‘evangelical economic theory’? You can extend this list as long as you please. My point is simply that we need to make connections with what is going on in the real world, and allow the gospel to bear on the issues that are facing those who live and work in our complex modem culture. We cannot allow the gospel to be squeezed out of that culture because it is seen to be of no relevance on account of our failure to make those connections in the first place.”- Alister McGrath, The Christian Scholar in the 21st Century 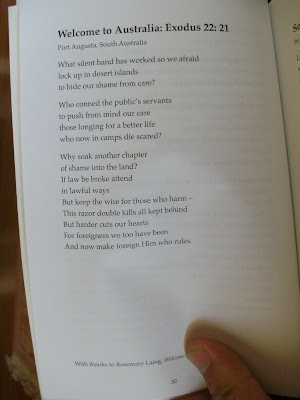 Posted by Matthew Moffitt at 12:02 am No comments: Links to this post

"[G]iven that there are no contemporary references to Jesus while he was supposedly alive, we may even doubt his existence. There is not one mention of him in the many missives that passed from Palestine to Rome." Chris Gaffney (the Secretary of the Victorian Labor College), The Australian Rationalist (Spring, 2005).

As John Dickson has pointed out, if Gaffney has discovered some missives that passed between Palestine and Rome, there are plenty of historian who would love to see them. Because there has been none found so far.

"Although Jesus probably existed, reputable biblical scholars do not in general regard the New Testament (and obviously not the Old Testament) as a reliable record of what actually happened in history, and I shall not consider the Bible further as evidence for any kind of deity." - Richard Dawkins, The God Delusion.

Frustratingly, Dawkins doesn't reference any reputable biblical scholars. He does rely on G.A. Wells, who is probably the most famed academic to deny the existence of Jesus. And yet Wells had no background in history, let alone the history of Jesus. He is a professor in German!
Posted by Matthew Moffitt at 4:19 pm 2 comments: Links to this post

Bauckham - The Canonicity of the Four Gospels 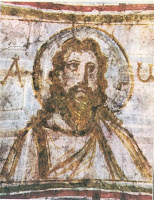 I just read a cracker of an article by Richard Bauckham on "The Canonicity of the Four Gospels" (and the lack there-of for the 'gnostic gospels). Here is part of what Bauckham has to say:

"What we have in the four Gospels, in my view, is good access to the apostolic testimony about Jesus. I stress the term testimony. The eyewitnesses from whom these Gospels derive were not disinterested observers. They were involved participants in the events they later recalled and narrated. They were committed believers in the Jesus whose story they told. They and the Gospel writers were thoughtful interpreters of the significance of that story for human salvation. As we have noticed, all too briefly, they interpreted that significance very differently from the way the Gnostic Gospels do. But let me make two important points about this form of history – what I’m calling apostolic testimony. First, as we have seen, history matters to this testimony, as it does not for the Gnostic Gospels. It matters for the apostolic testimony that Jesus was a real participant in real history, and therefore it matters that the accounts are well based on the way the eyewitnesses told the story. The history is interpreted, of course, but it is history that it is interpreted. Secondly, the testimony of the eyewitnesses was in fact the kind of testimony that was valued by ancient historians – that of involved participants, people who could convey something of the reality of the events from the inside. It’s the kind of testimony we need if we are to grasp anything of the meaning of events as exceptional as those of which the four Gospels tell. We cannot and don’t have to polarize fact and meaning. The four Gospels give us at the same time both the most reliable access we have to what happened in the history of Jesus and also the meaning that those who were closest to Jesus and the events perceived in them when they found them to be life-changing revelation of God.

This inseparable combination of fact and meaning, history and interpretation that we have in the four Gospels qualifies them for the authority that these Gospels came to have for the mainstream church of the second and later centuries. Appropriately they came to be regarded as both the best access we have to the history of Jesus and the normative understanding of the significance of that history for Christian faith."

I love the way Bauckham concludes this paper:

"I guess the question comes down to: is there a real Jesus, a Jesus who lived in first-century Palestine as well as being alive and accessible to believers today, and does it matter what sort of God this Jesus revealed? If the answers are yes, then I think we have to face the same unavoidable decision that the early church had to make between the Jesus of the four Gospels and his God, and the very different Jesus of the Gnostic Gospels and his god." - The Canonicity of the Four Gospels

Now to use this for my AnCon seminar.
Posted by Matthew Moffitt at 5:20 pm No comments: Links to this post

This is old news by now, but Ryan Smartt has starteda blog. As a high school Christian Studies teacher, the blog offers Ryan's relfections he shares Jesus in with his students. Right now Ryan is sneezing posts out for breakfast, so it's worth checking out his blog here: ryansmartt.wordpress.com.

Nat Swann has started blogging about her PhD over at nswann.wordpress.com.

The Evangelical History Association has a website. The EHA is really moving forward under the presidency of Meredith Lake, especially with the Divining the Past conference scheduled for July (which I've mentioned before here).

And for something different, I enjoy following the 52 suburbs blog, least of all for the photography: www.52suburbs.com.
Posted by Matthew Moffitt at 12:33 am 1 comment: Links to this post

"...[H]istory isn't enough by itself. Back to Reformation theologian Philip Melanchthon: It isn't enough to know that Jesus is the Savior; I must know that he is the Savior for me. History cannot tell me that. But it can reconstruct the framework within which it makes sense—the biblical framework that Jesus and his followers took for granted. If Jesus didn't really exist, or was really a revolutionary Zealot, or a proto-Buddhist mystic, or an Egyptian freemason, the "for me" floats like a detached helium balloon on the thin, vulnerable air of subjectivism. It is when we put Jesus in his proper historical context that the Resurrection proposes that he was the Messiah, that the Messiah is Lord of the world, and that he died and was raised for me. History is challenging, but also reassuring." - Tom Wright, Christianity Today.

So...for AnCon I'm running an hour long seminar on the historicity or reliability of the New Testament. It's also meant to be interactive. I'd like it to be helpful for apologetics, particularly with the EU running a campus wide mission in second semester.

I'm working on the biblical material at the moment...but are there any passages you think are particularly relevant. And do you have any hot tips or ideas on this topic. I'd love to hear your thoughts.
Posted by Matthew Moffitt at 8:47 pm 3 comments: Links to this post

"And I saw what appeared to be a sea of glass mixed with fire, and those who had conquered the beast and its image and the number of its name standing beside the sea of glass with harps of God in their hands. And they sing the song of Moses, the servant* of God, and the song of the Lamb:

‘Great and amazing are your deeds,
Lord God the Almighty! Just and true are your ways,
King of the nations!*4 Lord, who will not fear
and glorify your name? For you alone are holy.
All nations will come
and worship before you, for your judgements have been revealed.’
- Revelation 15.2-4

There was a beautiful moment at church last night. I was standing in second last pew (because I was late), and a few pews in front of me stood several Christian brothers and sisters. In that pew was stood someone from Australia, Taiwan, China and India. They were literally standing side by side, worshipping together our Lord Jesus Christ. The CCIW 6pm Ashfield congregation is growing, and part of what makes it such a joyful place to be is that people from different nations (who are political and economic rivals) can join together and declare that it Jesus Christ who is King of the nations.

"See to it that no one takes you captive through philosophy and empty deceit, according to human tradition, according to the elemental spirits of the universe, and not according to Christ. For in him the whole fullness of deity dwells bodily, and you have been filled in him, who is the head of all rule and authority. ...He disarmed the rulers and authorities and made a public example of them, triumphing over them in [the cross]." - Colossians 2.8-10, 15.

PS Has anyone done a thematic study of 'the nations' in Revelation?
Posted by Matthew Moffitt at 6:32 pm 3 comments: Links to this post