When Sydney University was established in 1850, the founders envisioned a center of learning that would be equal to the great Oxbridge traditions of which they where heirs. The stars may have changed, but the mind stays the same. Indeed, the new university would embody the great advances of modernism that Cambridge and Oxford didn't. In particular, the university would be founded without a theology department and outside the control of the church.

In 2010 I'll begin a two-year ministry traineship (the Howard Guiness Project) through the EU Grads Fund in partnership with the Sydney University Evangelical Union (SUEU or EU). The EU is made up of between 600-1000 Christian students. 2010 will be their 80th anniversary of proclaiming Jesus as Lord to the campus and growing Christians in their faith and devotion to Jesus. I'll be working with students in Agricultural and Veterinary Science (the AgVet faculty), and also with postgraduate students from several different faculties across the university. I'll also receive training which, Lord willing, God will use for his purposes for many years to come.

"The university is a clear-cut fulcrum with which to move the world. The church can render no greater service, both to itself and to the cause of the gospel, than to try to recapture the universities for Christ. More potently than by any other means, change the university and you change the world." - Charles Habib Malik, former President of the UN General Assembly, Pascal Lectures, 1981. 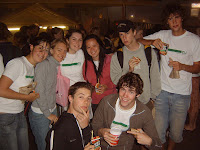 After three years of working at CMS and being exposed to the ministry of CMS missionaries around the world, I'm totally convinced of the truth of what Malik says. Part of what excites me about the next two years is the vision of the EU Grads Fund: "To flood God's church in Sydney, Australia and beyond with lay and vocational Christian leaders who are biblically and theologically mature, servant hearted, and innovative ministry strategists." Furthermore, in several years Alison and I would, Lord willing, like to serve overseas in student ministry. So we see 2010 and 2011 as a really important time for me to learn and be trained and have my mind more and more transformed into the image of Christ.

You would be interested in supporting me either in prayer o financially, please contact me: mpmoffitt [at] gmail.com.
Posted by Matthew Moffitt at 11:07 pm 2 comments: Links to this post 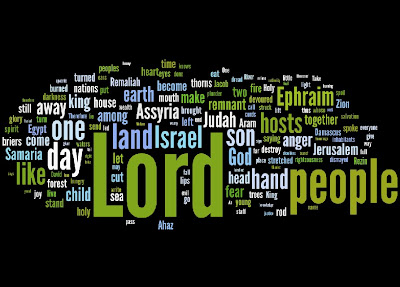 Because it's Advent, here is Isaiah 6-12 as a wordle.
Posted by Matthew Moffitt at 11:27 am No comments: Links to this post

Posted by Matthew Moffitt at 1:57 pm No comments: Links to this post

Email ThisBlogThis!Share to TwitterShare to FacebookShare to Pinterest
Labels: blogging

Jude as a Wordle

Posted by Matthew Moffitt at 5:08 pm No comments: Links to this post

DB Hart on Women and the Early Church

For David Bentley Hart, one reason for the spread of Christianity if the four centuries after Jesus was it's vision of humanity. It was the 'total humanism' offered by Christianity in the God who became human, in stark contrast to the dehumanizing practices of paganism, that was so attractive to inhabitants of 'the ancient world'. Hart argues that as society was transformed by Christianity in live with it's vision of humanity - both before and after Constantine - Christianity was increasingly attractive to woman (a point collaborated by the pagan emperor Julian).

"Frankly, no survey of the documentary evidence regarding early Christianity could leave one in any doubt that this was a religion to which women were powerfully drawn, and one that would not have spread nearly so far or so swiftly but for the great number of women in its fold.

This should not really surprise us. Whether women of great privilege would have gained much by association with the Galilaeans can no doubt be debated, but there can be little question regarding the benefits the new faith conferred upon ordinary women - women, that is, who were neither rich nor socially exalted - literally from birth to death. Christianity both forbade the ancient pagan practice of the exposure of unwanted infants - which is almost certainly to say, in the great majority of cases, girls - and insisted upon communal provision for the needs of widows - than whom no class of persons in ancient society was typically more disadvantaged or helpless. Not only did the the church demand that females be allowed, no less than males, to live; it provided the means for them to live out the full span of their lives with dignity and material security. Christian husbands, moreover, could not force their wives to submit to abortions or consent to infanticide; and while many pagan women may have been perfectly content to commit their newborn daughters to commit their newborn daughters to rubbish heaps or deserted roadsides, to become carrion for dogs and birds or (if fortunate) to become foundlings, we can assume a very great many women were not. Christian husbands were even commanded to remain faithful to their wives as they expected their wives to be to them; they were forbidden to treat their wives with cruelty; they could not abandon or divorce their wives; their wives were not chattels but their sisters in Christ. One might even argue that the virtues that Christianity chiefly valued - compassion, humility, gentleness, and so forth - were virtues in which women had generally better training; and that it was for this reason, perhaps, that among Christians female piety was often so powerful a model of the purity of their faith. Even in the latter half of the fourth century, Christian men as prominent as Basil of Caesarea and his brother Gregory of Nyssa could look to their brilliant and pious sister Marcina as a kind of ideal of the Christian life. That ancient Christians were not modern persons, and so could not yet conceive of a society in which men and women occupied the same professions or positions, is both obvious and utterly undeserving of reproach. The 'social technology' of perfect sexual equality - or, at any rate, equivalence - was as far beyond their resources as was the material technology of electric light. But Christians had been instructed by Paul that a man's body belonged to his wife no less than her body belonged to him, and that in Christ a difference in dignity between male and female did not exist. And while it would be silly to imagine that the women who converted to Christianity in the early centuries had first calculated the possible social benefits of such an act, it would be just as foolish to deny that Christian beliefs had real consequences for how women fared in the Christian community, or imagine that Christian women were entirely unconscious of the degree to which their faith affirmed their humanity." - D.B. Hart, Atheist Delusions, pp. 159-161 (bolding added).

Posted by Matthew Moffitt at 4:59 pm No comments: Links to this post

"I expect the meetings in Rome have begun an inexorable reabsorption of the Anglican Church into the world's oldest institution. The church created by the charismatic King Henry VIII has found its current archbishop, an undertaker, appearing to see his mission as an orderly burial."

According to Ross Cameron, former Federal MP for Parramatta (and one of several devoted Roman Catholic Liberals who came to prominence during John Howard's premiership), "we must assume the Anglican idea is fast reaching its use-by date." Cameron is quite polite in his Op-Ed piece from last Saturday's SMH: "It has, however, been a great innings". Cameron is quite ready to assign Anglicanism as the origin of everything from religious tolerance to scientific discovery. But Cameron is ready to consign Anglicanism, if not to the dustbin of history, then at least the historical retir 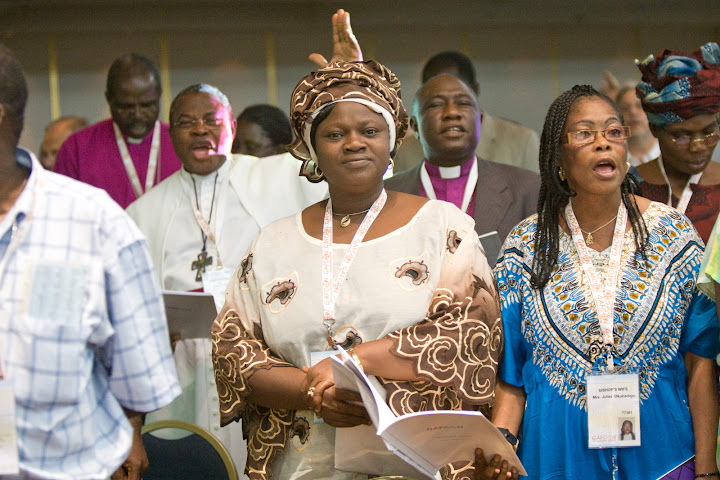 Which is because of a fundamental error in Cameron's thesis. Cameron's Anglicanism has no identity because hasn't developed since the turmoils of Henry VIII. And this is an error because Anglicanism hasn't been static, and has had significant developments in expression and identity in it's five centuries (which I have previously described here). According to Gerald Bray:

"Most people seem to believe that when Henry VIII broke with Rome in 1534, he invented the Church of England and made himself its head in order to legitimise his divorce from Catherine of Aragon, and that since that time, his successors have all been bound to belong to this somewhat dubious creation, an obligation which is symbolised by the royal title ‘Defender of the Faith’. This is false." - Honi soit qui mal y pense (worth checking out for Bray's analysis on current moves to remove the exclusion of Roman Catholics from Monarchy). 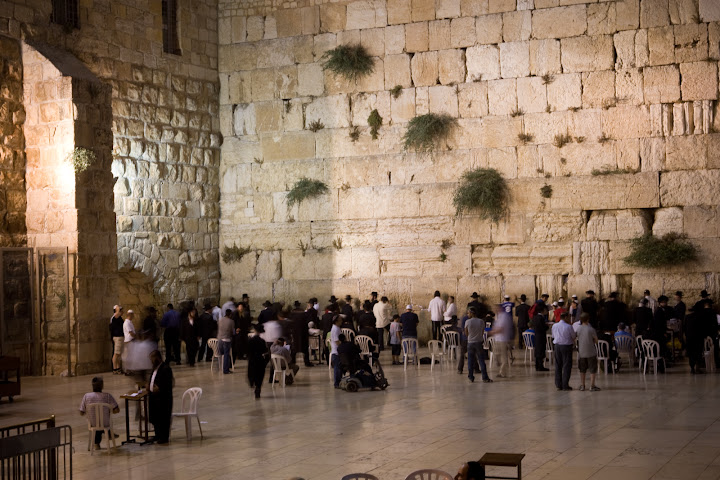 Cameron's analysis of the early history of the Anglican church is somewhat erroneous. The average Anglican in the 16th and 17th centuries would have strongly aligned themselves to the Protestant cause. And to argue that England sat on the sidelines of the "religious wars" (which according to D.B. Hart had more to do than with the rise of the nation-state against empire and church) is to ignore most historical scholarship in the area for the past 20 years (such as Jonathan Scott).

Cameron's Op-Ed is also typical of most detractors of the Anglican Church from the western world. The Anglicanism they see and present is declining in the UK, USA, Canada, Australia and New Zealand. They present it as increasingly irrelevant and being run aground by "fundamentalists". What they neglect is the phenomenal growth Anglicanism has experienced in Africa, Asia and South America. The rise of the Global South has not revitalised Anglicanism, it's the future. Cameron's assertion that Anglicanism is entering her autumn years are greatly exaggerated. Which is why I'm looking forward to the Monday night of CMS Summer School when the President of CMS, Peter Jensen, will be speaking on the role of a mission agency in the Global South.

Lamentations As A Wordle 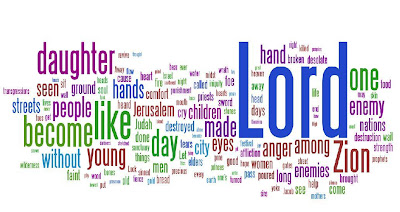 As requested by Laura, this is what Lamentations looks like as a wordle. I noticed that 'like' seems to be a frequently used word. And I'm pretty impressed by how big 'Lord' is.

Any suggestions on what to do next.
Posted by Matthew Moffitt at 1:09 pm No comments: Links to this post